The Random History Of Football 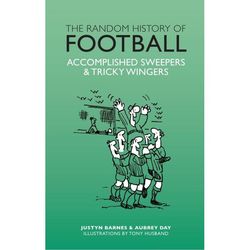 This is the story of soccer as it's never been told before. A cock-eyed compilation of match reports, correspondence and reminiscences from pundits, commentators, players, officials and spectators who weren't there but should have been: a Victorian public school headmaster bemoans the advent of soccer; PC Scory records the altercations at the White Horse Cup Final in his notebook; the Russian linesman has second thoughts about Geoff Hurst's equaliser; God berates the Cardinal Archbishop of Buenos Aires about Maradona's claims of divine intervention; David Beckham's hairdresser provides David Seaman with coiffeur tips in the aftermath of the England's World Cup 2002 exit.

The nutmegs, the tantrums, the penalty-shoot-outs that have provided the ubiquitous topic of conversation for generations, are entertainingly evoked in The Random History of Football; these stories are told in fun, bite-sized chunks, perfect for every soccer fan! Width 117mm Height 184mm Hardback.